As many of you know, I have had some failed relationships / marriages. I have also made a number of pretty bad life decisions.

Up until the end of 2013, I had never had a tattoo. Quite frankly, I never wanted one. I have nothing against ink, but there was nothing I wanted to put on my body permanently. 2014 rolled around and I met someone I fell madly in love with and promptly started tattooing her name all over my body.
We were married in June 2014 and I thought it was safe to tattoo her name on me, because I thought I finally did it right and this was forever. In Aug 2018 I was told my marriage was ending. Without warning this was suddenly going to be my 5th (and hopefully) final divorce.

As much as I was heartbroken, I had a more tangible problem to deal with. I now found myself with SEVERAL tattoos bearing the name of my soon to be ex-wife. 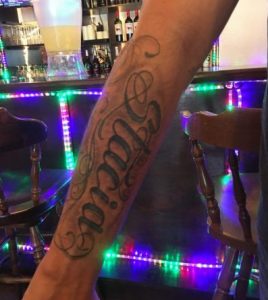 Since 2019, I’ve been trying to get them fixed, but it has been a slow process (especially due to the 2 years of corona). Her name, which was tattooed on my ring finger was the one I was not willing to coverup. I didn’t want anything on my ring finger due to the obvious symbolism. I needed to get it taken off completely. My friend Matt suggested a legitimate (but not well known) treatment. So, I decided to have it taken off with acid. That’s right, acid was injected into my finger to burn away the ink – I do NOT recommend this  LOL
(pic just below – don’t look if you are a little squeamish) 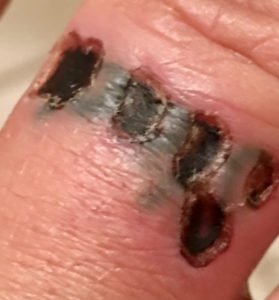 So far, most of the coverups I’ve done have been pretty easy and straightforward. However, the most recent coverup was somewhat challenging. I had her name on my right forearm. It took up a lot of space, and I wasn’t sure what to do with it. One day, a friend in TX  (Mark Maggiore) recommended that I convert it to Pistachio. He was kidding, but I liked the idea. Quite frankly, I LOVE PISTACHIOS!!!
I was talking to my friend Ted Kelly and my son. They both thought it was a fun idea (although a bit crazy). So, with the help of my friends at Hot Rod Tattoo in Chandler, AZ I set out to make it happen. 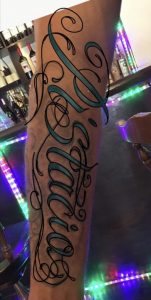 The pic above was an artist rendering. We later discovered it was missing an “H”
(luckily we made the discovery before we started the tattooing – NO REGERTS)

Once the proverbial ink was dry, Ted thought it would be fun to take all the video footage we had, and to make a short documentary film.
Once Ted did the editing, he created a poster and then started submitting the short movie to film festivals. We were THRILLED when our submission was accepted by the Lift Off film festival in London England (held at Pinewood Studios). I was told our submission would be available online from June 8 – 20. Hopefully I can make a copy of the film available sometime soon (on my website).

Here is a link to the movie trailer

Anyway, I still have some more tattoos to fix, but I am thrilled with my new Pistachio tattoo on my right forearm.
As I mentioned…… I LOVE PISTACHIOS, AND I WILL FOREVER !