I don’t care what you say, it tastes like cauliflower !

Before I even start, I am willing to concede that some of you think you like cauliflower
(my personal belief is you don’t really like it, but you’ve convinced yourself that you do).
LOL

I’m doing a little shopping at a warehouse store where the COST is usually lower and I rarely have COmpany.
As I’m roaming the store, I pass by a samples cart that is manned by a guy who is ALWAYS really friendly.
Whenever I see him, I always stop to say hi and visit a little.

Me: Hey how are you doing?
Sample guy: I’m good. It’s good to see you.
Me: You too. What do we have today?
Sample guy: Cauliflower Crisps. This is a really good snack. It’s better for you than chips and you can’t even tell it’s
cauliflower.
Me: Yeah you can.
Sample guy: No seriously. I don’t like cauliflower at all, but I like these.
Me: I’ve heard that before. People are substituting cauliflower into a lot of things and it all tastes like cauliflower.

We go back and forth several more times. The conversation is very friendly and we are both smiling as we each plead our case. Suddenly, he moves the conversation to action……….

Sample guy: Just try one. I think you’ll be really surprised. I don’t like cauliflower at all, but I do like these.
Me: If it were anyone else, I would have already walked away. However, for some reason I believe you enough to give it
a try.

I take one of the little cups that are on the counter for shoppers. I take one of crips out of the cup and reluctantly put it
in my mouth. Instantly all I taste is F-ING CRISPY CAULIFLOWER. I hate to sound like a baby, but truthfully I started
gagging and ran over to the garbage can to spit it out. Sample guy started to laugh as I continued to spit remnants of cauliflower into the garbage can.
I finally regain my composure………….. 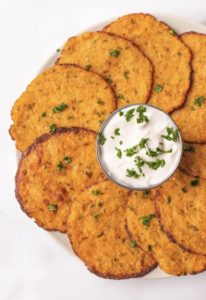 POSTLUDE :
(I honestly don’t know if I’m using “postlude” correctly, but I like the word and decided to give it a try)

I walked away laughing and headed to another sample cart. I got a hold of some pulled pork in an attempt to get
the cauliflower taste out of my mouth. Then I walked back to the sample guy’s cart………

Me: I can’t believe I fell for it. That was horrible! I know we’re both laughing, but I want you to know I’m not kidding!
I’m not pretending it was worse than it really was! That was nasty. And now, since I’ve got some free time, I’m going
to stand here and warn other shoppers that this tastes like cauliflower. You’re not gonna get away with that again on
my watch.

For the next 20 minutes I hung out with the sample guy. We talked a bit and laughed a bit. BUT, every time a shopper
walked by I would tell them……

Me ( to all shoppers ): If you like cauliflower you might like this, but don’t let the sample guy tell you any different.
THIS IS CRISPY CAULIFLOWER !