I don’t care about The Oscars, Will Smith or Chris Rock, but….. This matters:

I stopped watching awards shows years ago (reasons unimportant for this rant). I was not aware the Oscars were being televised recently, when social media started to buzz about the Slap Heard Around The World. If not for being a comic, I doubt I would have bothered to check it out, but knowing it was a big topic of conversation I decided I should know what happened. 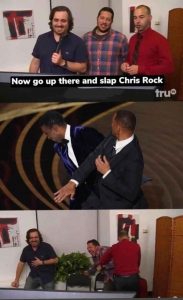 So, much like everyone else, I watched the short video clip. Initially I thought I missed something, so I watched a few more times. Nope, there was really nothing to miss.
Chris Rock made (what appeared to be an off the cuff) joke about Jada Pinkett Smith’s hair, looking like she was going to star in G I Jane 2

Will Smith appeared to see his wife was upset

Will Smith stopped laughing, jumped out of his chair and calmly walked up to the stage. From there it appears
he slapped Chris Rock in the face. He then calmly walked back to his seat in the audience and proceeded to yell the “F bomb” at Chris Rock a few times.

Unknowns (at least things I don’t know at the moment)
Was this staged ?   maybe
Was this real ?     maybe
Was there some additional history between Chris Rock & Will Smith ?  maybe

With all that said – I DON’T CARE

I think Hollywood is far too self indulgent, self absorbed, self important, and live in a world where the rules that
apply to you and me, don’t seem to apply to them
(Just try smacking someone in the face and see what happens to you !!!)

My concern;
As people become more polarized and more people seem to be easily offended, Will Smith striking Chris Rock because of a joke sends a dangerous message and possibly sets a dangerous precedent.
Whether real or a publicity stunt, the message sent to people watching the Oscars could be; it is acceptable to strike another person if they make you angry or hurt your feelings.

In my experience over the last several years (and it seems worse since clubs started opening after all the shut downs), a small segment of audience members are becoming more erratic, unpredictable, and behaving in a way that, if it continues to escalate, feels like it could spill over into something physical. The Oscars stunt might push overly sensitive people and mildly unstable people to use Will Smith’s example as the encouragement they need to take their grievances up a notch.

So, was it real, was it a stunt? I don’t care, but it does set a very bad example and sends a very bad message to people who are looking for an excuse to hit someone!