Has tolerance gone too far ?

I have always found language interesting. People often assume a word has a generally understood meaning.
Sometimes meanings are obscured and words are manipulated to illicit certain believes and behavior in others.
As an example, the generic definition of tolerance;
willingness to accept feelings, habits, or beliefs that are different from your own ……………………

Is acceptance of someone else’s feelings, habits, or beliefs absolute in all cases, all the time, or are there limits?

I have my own personal beliefs, and am not looking to sway anyone. My interest is to state my general viewpoint with
some questions, hoping to hear what you think.
First a preface or two; I’m neither interested in nor referring to what people do in the privacy of their own homes, or when their behavior has no impact on others.
Is there a limit to tolerating behavior from someone in public when that person is negatively impacting
everyone around them?

I’ve always found it both funny as well as sad that almost every entertainment venue is forced to spend several minutes
before every performance reminding adults how to behave in public.
No heckling
No audio or video recordings
No calls or texting in the showroom
Keep talking down to a minimum
etc

I often wonder why adults need to be reminded at movie theaters, comedy clubs, theaters, sporting events, and other venues how to behave in public. Although most people don’t need the constant reminders, and most people are pleasant and respectful of others in public settings, other people seem to not give a damn about anyone but themself.
Should their behavior be tolerated?
Does it matter to you how much you paid for the evening;
(Possibly a babysitter, parking, cost of admission, ticket surcharge, 2 item minimum, maybe even a souvenir, flights, hotels, etc)
Maybe you got in for free, or at the other end of the scale, maybe you’ve spent hundreds to thousands of dollars for the event you’re attending –
SHOULD YOU TOLERATE RUDE AND DISRUPTIVE BEHAVIOR FROM SOMEONE ELSE BECAUSE THAT PERSON BELIEVES AND FEELS THEY ARE ENTITLED TO DO ANYTHING THEY WANT?

Here’s a question I have found very few people consider; Even if you got in for free, is your time worth anything to you????

These individuals almost always have a reason for their behavior:
I’m funnier than the comic
I know it’s ok to record the show because I want to record it
I got a call and had to take it
I didn’t think the entertainer was very good so I didn’t need to pay attention
I found that joke offensive
I’m drunk
etc

Do you think one person or a few people should be tolerated / allowed to ruin the night for hundreds of other people (yourself included)?
I do not !

If someone gets a call…. take it in the lobby
If a person doesn’t like the show, they are welcome to leave
If someone had too much to drink, they can call for a ride
Things do come up, but there is almost always a way to handle an issue or problem without ruining everyone else’s evening.

I have spoken with several comics, club managers, staffs, and other people who work in the entertainment industry and it
seems many people believe the behavior of some has become so much worse than it was before the pandemic. I don’t
know why there is a segment of people who are so selfish and self centered that they don’t care about anyone else.
I personally think, in public settings, disruptive and rude behavior should not be tolerated.
To be very clear, short of a medical emergency, I don’t care what the reason is…. No one should have the right to ruin a show
that potentially hundreds of other people want to see.

Now for a bit more information, you might think is a rant. In either case I’m asking for your indulgence. If not indulgence, at the very
least for your tolerance……

Once I was doing a show in the midwest. While telling one of my stories, a guy stood up from his table, walked up to a front row table and while standing (his back to me) he began a conversation with the 2 women at the table. I stopped my show to watch this unusual development. After a minute or two, I started talking to the guy, yelling, “excuse me. Hey you, guy standing up in the front, is everything ok? Excuse me, Sir, could you please sit down”
With that he turned around, and looking angry at me for interrupting him, he literally said, “Do you mind, I’m trying to get laid” !

Once during a show, I had just finished asking for volunteers. The audience was enthusiastic and the stage filled immediately.
It was a smaller stage with only about 14 chairs. I thanked everyone for coming up and apologized to everyone who wasn’t able to secure a chair on the stage. A young woman (between 21 – 25 yrs old) stood on stage, without an available chair, and unwilling to head back to her table in the audience….
Me: Excuse me, I’m so sorry, but all the chairs are taken
Woman: I want a chair
Me: I understand that, but unfortunately there aren’t available
Woman: I don’t care. It’s my birthday and I want to volunteer
Me: Happy birthday. If you want, you can concentrate from you  seat in the audience and if you become hypnotized, later there will
probably be room for you on stage.
Woman: I’m not leaving the stage. I want a chair.

Just as I was about to call security to have her removed from the stage, a good portion of the audience started chanting….
“Let her stay. Let her stay. Let her stay”
Then one of the volunteers said, “I guess I will go back to my seat in the audience so she can have my chair”
I told him I thought that was very nice of him to offer, but not necessary, and actually not a good idea.
The audience again started chanting for me to let her stay.
So, I said to the audience, ” If you all want her to stay, and this gentleman is willing to give up his chair, I will let her stay. BUT BEFORE WE DO THAT, you need to know a few things. 1. The very best case, she is going to have a negative impact on this show. Or 2. She is going to ruin the show. I’m not guessing and I’m not exaggerating. This is your show and I’ll do what you want, but I would recommend that you consider I know what I’m talking about, I’m only trying to give you all the very best show possible, and finally, and I mean this – If you demand I ask this gentleman to give up his chair and you insist that I make room for this woman, then she stays on stage the entire show – NO MATTER WHAT. If you discover that she is ruining the show and you want me to ask her to leave the stage, I will not do that. So you either trust my judgement, or you accept whatever the consequences are because you’re insisting she be given a chair.
Practically the entire audience chanted – let her stay.
So, the gentleman gave up his chair. I started the induction, and immediately, the birthday girl started talking to some of the other volunteers. She was disruptive. She didn’t follow any directions. She prevented everyone around her from becoming hypnotized. And within moments the audience could tell this selfish, self centered jerk didn’t give a damn about the audience, the show, or anything else. The audience QUICKLY went from tolerant to angry, yelling at me to remove her from the stage. I stopped the show, looked around the room and reminded the audience that we had a deal and she would be on stage for the entire show. (Truthfully, it didn’t really matter if I had her removed or not. The damage she did in the first several minutes was irreparable.)

One more example……….
During a recent show a middle aged woman started yelling out random stupid comments at me from the moment I got on stage. I told her I was thrilled she was at the show and I hoped she was going to have a great time, but she needed to stop yelling at me. She told me she was allowed to yell out. Then we spent the next several minutes arguing. I kept trying to angle back to the show, but she kept interrupting me. Management came over to talk to her and she ignored them.
I said to the lady, that until I asked for volunteers my show wasn’t  a group performance. She told me I didn’t know how comedy worked. She went on to say, comedy is for everyone and anyone can join in. I told her that she clearly didn’t understand how comedy is performed. She told me I didn’t know what I was talking about. I then told her I really wanted her to have fun, but she was going to need to stop yelling out or she would be asked to leave. She said she didn’t have to be quiet. She was having fun and she was allowed to join in. I told her she had one last chance. She was being rude and disrespectful to everyone else in the room. She then proceeded to tell me she didn’t care if other people were aggravated, she had the right to join in.
With that, I asked management and security to escort the woman out. She was shocked and became furious with me. Security told her she had to leave, but she wouldn’t move. Finally, after some determination from management, the lady got up and started walking towards the exit  – looking back at me and flipping me the bird the entire way out.

Tolerance (to tolerate) : is there a limit to how much someone should be tolerated ? 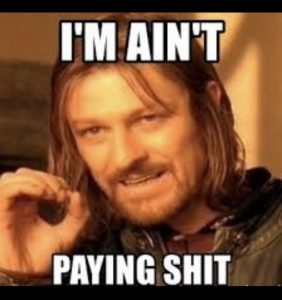