Comic or Hypnotist OR Comic and Hypnotist

When I took my first step on to a stage so many years ago, my single desire and focus was to be a comic. At the same time, I had been studying hypnosis for years, and was working with people privately for self improvement and to achieve their desired goals. Initially, it was never my intent to be a stage hypnotist. In my early 20’s I started performing comedy at open mic nights all over the Phoenix area. There was a good group of very funny local comics. Most of the performers were strictly stand up comics. Some of the performers were also  comic magicians, comic musical acts, and at least 1 comic ventriloquist.
I was constantly scared, but was never happier to be on stage to perform my material as I also tried to learn from my mistakes and from watching the other comics.

One day, my housemate asked me why I didn’t perform stage hypnosis. I told him I had no interest in being a stage hypnotist, my focus was on being a comic. My friend and I went round and round for several month, and then I finally made him a deal with him. The deal was simple; I would try to talk a club into letting me do hypnosis one show on one night. Regardless of the outcome – good, bad, or a complete failure, he would never bring it up again. With the deal made, I waited for the night to come, where I was going to get on stage and make a complete fool out of myself. When the night did finally arrive, I wanted desperately to back out, but I made a deal and I was going to see it through. I wasn’t worried about hypnotizing people because I had been doing that for years in private sessions.
Some of my concerns were:
1. No one volunteering
2. No one taking it seriously
3. No one cooperating with me so I could hypnotize them
4. The audience having no interest in seeing the show I was performing

Without going into detail, I was introduced, I explained what I planned on doing, and then asked for volunteers. To my shock, the stage filled with people who appeared to be willing and interested. Then, as I began my first ever stage induction, I watched in awe and utter disbelief as volunteers started exhibiting signs of deep hypnosis. Now I had only one problem. Since I never thought it would get this far, I hadn’t actually planned a show. I had absolutely NO MATERIAL written, nor bits planned. In a panic, I did a few simple bits I once saw another hypnotist perform (Pat Collins – The Hip Hypnotist). Having spent the last couple of years performing only comedy, and with the desire to be a full time professional comic, I knew one of the biggest cardinal sins of comedy was to steal someone else’s material. In that moment, I knew I either had to do something, or the audience would be staring at sleepy people on stage doing absolutely nothing and a hypnotist frozen with fear. So out of desperation, I did some of Pat Collin’s bits (if it’s any consolation, I felt like a dirty hack, and swore to myself, while still on stage I would never do that again, no matter the circumstances.)
The show was a success. The volunteers were great. The audience seemed to have fun. And that one night changed the direction of my career.

From that moment, I decided to start writing a show that combined hypnosis with comedy. However, I decided I wanted my show to focus on the comedy and much less on the hypnosis. In other words, it was never going to be that important to me to hypnotize all the volunteers, nor was it a goal of mine to have the audience look at me like I had magic they would never understand and could never figure out. Instead, I wanted to demystify hypnosis, make it seem approachable, safe and fun for the volunteers. I wanted the audience to laugh with the volunteers and not at them. I also hoped some of the audience would wonder what it felt like, see that the show was fun and not mean spirited, and would consider volunteering if they ever came to another show. I also decided from the very beginning that I wanted to write bits that would highlight the volunteers creativity to see where a situation might go. I tried to pattern my show in a way that would combine something like the sketch comedy of Saturday Night Live, with the spontaneity of an improv group like Second City or the Groundlings. It seemed more interesting, more fun, and funnier to suggest to creative individuals a scenario where they had to explore who they were in that moment and how they would interact with each other.

I’ve always joked with an audience that I know the stereotypical things people expect when they see a show with hypnotized volunteers – things like; barking like a dog, walking or quacking like a duck, lip syncing to some musical artist, etc. I don’t think there is anything wrong with that kind of approach. If a hypnotist performs those types of bit, they get volunteers, and the audience has fun, that’s great. There should be room for everyone.

I look at my show today as well as looking back over the years and I am happy with the direction I have taken. I may not be the fastest hypnotis. I may not get the most people hypnotized. But that was never my goal. I love performing stand up. I love that my life which is somewhat of a shit show (I mean that in the best way possible – LOL) provides endless amounts of material. I love the interest and enthusiasm of the audiences and most of all, the people who are willing and interested in volunteering. I love the creativity and spontaneity of the show. I especially love that no two shows are alike. I have been wildly fortunate and grateful beyond words to be a part of a show, night in and night out that continues to surprise and entertain me as well as the audience.

So, to the title of this blog – Comic or Hypnotist OR Comic and Hypnotist.
I don’t know how other people view my show or define what I do. However, I think of myself as a comic and a hypnotist. I love combining the 2 and want to thank my housemate from all those years ago for talking me into trying. 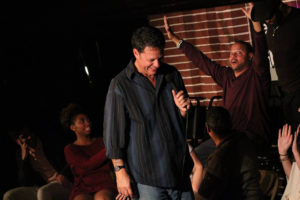